Dickey and Wright star in Mets 5-1 win over Miami 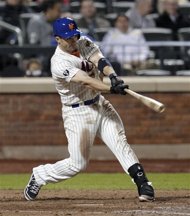 For the second straight night, the Marlins took a 1-0 lead over the Mets in a pitching duel and for the second straight night the Mets stormed back. R.A. Dickey was pitching splendidly for the Mets when Omar Infante tried to rain on his parade with a fifth inning solo home run. However, David Wright ensured that Dickey came out the winner with a dramatic two-run blast of his own with two outs in the bottom of the sixth.

The round tripper, that came on an 0-2 Mark Buehrle change-up, gave Wright the RBI he needed to pass Darryl Strawberry on the Mets all time leaders list. Wright now has 735 RBI in his career.

To clinch the victory, New York added three runs in the eighth thanks to RBI hits from Lucas Duda and Mike Baxter. Duda had two hits for the game and raised his numbers to .249/.329/.426 while Baxter seems to be making the most out of his limited playing time and is hitting .267/.389/.400 in his 18 plate appearances this season.

As expected, the game went by relatively quickly, especially while Dickey and Buehrle were still in the game. Dickey breezed through Miami with sevens strikeouts and one walk in seven innings while Buehrle had four strikouts and one walk in his seven frames. The two home runs were the only tallies allowed by either pitcher.

The Mets have little time to appreciate this victory, as they are right back at it again today with a first pitch at 1:10 PM. Jon Niese will take the mound for the Mets versus Ricky Nolasco of Miami.