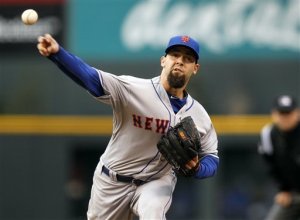 I didn’t see a lot of last night’s Mets game because I was out doing some real socializing, but I did hear that Dillon Gee pitched a great game. In a spot where the Mets need Gee to go deep in order to give the bullpen a break, the right-handed birthday boy delivered. Gee threw a career high 116 pitches to get through seven innings and put the Mets back in the win column.

“We needed some innings, there was no question,” Mets manager Terry Collins said. “Dillon was going to have to throw 100 pitches today, because we were just short in the ‘pen.”

Gee had to power through a troubling fourth inning in which he allowed the Rockies to come back from a 3-1 deficit and take the the lead 4-3. The first four batters of the inning all got base hits, including Todd Helton with an RBI double and Michael Cuddyer with an RBI single. Later in the frame, after Gee had recorded a couple of outs, starting pitcher Guillermo Moscosco gave Colorado the lead with a clutch RBI hit of his own.

However, Gee would settle down to pitch three more solid innings after getting out of the fourth. The Mets offense helped out by taking the lead right back in the top of the fifth. After Gee and Kirk Nieuwenhuis both struck out, Ruben Tejada and Daniel Murphy set the table with a pair of singles. Then David Wright lined his own single to right field to tie the game and move Murphy over to third. After Wright stole second base, Lucas Duda bounced a seeing eye single up the middle to score both Murphy and Wright and give the Mets a 6-4 lead.

“I think balls are starting to fall a little bit more,” [Duda] said. “A little bit of luck. And I’m just kind of relaxing.”

The Mets would get an insurance run in the ninth when the increasingly useful Mike Baxter hit a pinch-hit double and later came around to score on an Edgmer Escalona wild pitch. Although Frank Francisco allowed a Dexter Fowler home run and a Tyler Colvin triple in the bottom of the inning, he eventually got pinch hitter Jason Giambi to fly out to end the game.

Today the Mets play the rubber game in Colorado at 3:10 PM. Johan Santana will pitch against the ageless wonder Jamie Moyer.