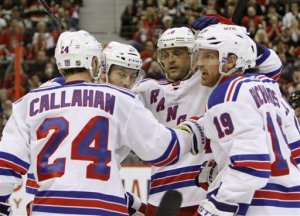 Hockey is often a tough sport to analyze. There aren’t of stats to discuss like in baseball or basketball and the sport isn’t as complicated as what goes on in a football game. A lot of times the game comes down to which way the puck bounces, or which goalie is hot, or maybe even who “wants” it more.

I’m still trying to figure it out for myself, but I was surprised to see that Joe Fortunato over at Blueshirt Banter wrote a post explaining how important Game 3 is tonight.

If the Rangers go into Washington and get a win over the Capitals, the Rangers would have a 2-1 series lead which would guarantee them at least coming back to Madison Square Garden tied at 2-2. A loss, on the other hand, would give the Capitals a 2-1 edge in the series with Game 4 looming in Washington.

Sure, any playoff game is important, but trying to make Game 3 more important than any other game is kind of counterproductive. Back in the Quarterfinals against Ottawa, the Rangers won Game 3 to supposedly regain the momentum that they lost from the Game 2 defeat. However, the Rangers ended up losing the next two games to come within one loss of elimination.

That’s why I’ve decided to order all Rangers fans to chill out. As long as a team doesn’t fall behind by two games in a series, there is no reason to panic (unless it’s Game 7). The point is, even if the Rangers lose tonight, there is still a margin for error. Wait until the team is down 2-1 before you get all bent out of shape. It’s hockey. Let’s have some fun tonight.

Besides, the Rangers have the best goalie in the league, right? Not to mention and red hot rookie and an incredibly gifted scorer who has got to be even more desperate to score again than all his fans are. Tonight will surely be an intense hockey game, as Ryan Callahn rallies the troops:

“We’ve got to bring our intensity up,” said captain Ryan Callahan, who had eight hits, three blocked shots and two shots in Game 2. “It’s a tough building to play in. I don’t know if there’s any frustration. You’re going to play good defensive teams in the playoffs.”

I just hope they don’t get too intense. If the Rangers “play loose” and let their talent shine through, they may just find themselves on the winning end of Game 3. Or I could be totally wrong.