The Knicks will try to do the impossible tonight 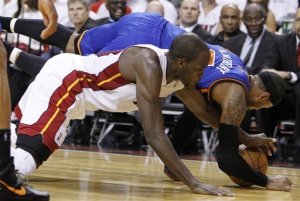 Pretty much everyone and his or her mother is under the impression that the Knicks have no chance to defeat the Miami Heat tonight at American Airlines Arena. However, the NBA has decided to lift the hopes of Knicks fans and play the game anyway. Of course, it’s at the same time as the Rangers game because I’m apparently in the only human on Earth who cares about both teams, so I won’t be watching most of this one.

Despite that, I am excited about the prospect of a Game 6 at Madison Square Garden, no matter how slim that prospect may be. Remember, there were times when Dillon Gee was not considered a good prospect, and now he’s a less-than-horrible major league pitcher. My favorite bit of news about the basketball game is that Toney Douglass is likley to get significant playing time. I’ve been a big proponent of Toney’s since he was drafted, and even though he has fallen out of favor with both Mike D’Antoni and Mike Woodson, I’m still on team Toney.

Douglas will be coming off the bench tonight, but he really should be starting. I know Bibby is more of a “pure” point guard, but Douglas has such a large advantage in the defense department. Really, both guys are pretty lousy at offense. Why not start the guy that is actually good at something? Probably because of seniority. I have a lot of respect for Mike Bibby and most veteran players, but let’s try to get the best guys on the court tonight, shall we?

I know I said before that the Knicks were actually going to play the Heat tonight, but Amar’e Stoudemire is being a big bummer and acting like his hand still hurts a lot.

“If you noticed, a few times I fumbled the ball on catches,” Stoudemire said yesterday. “I can’t dunk with two hands. I can’t really grab a rebound aggressively with two hands. But there’s always ways you can compromise on the court, so I’ll figure it out.”

Amar’e was really impressive in Game 4 with 20 points and 10 rebounds on 8 of 13 shooting, so hopefully he can “figure out” a way to repeat that performance in Miami tonight and give the Knicks a fighting chance.

The Knicks only shot 42.7% from the field in Game 4 and 22.7% from three-point range, so there still is some room for improvement on offense. It’s not as though the Knicks had an impossibly good game that comes once in a lifetime. Carmelo was pretty spectacular, but the rest of the Knicks were pretty pedestrian. If New York can get more than a 3 for 15 night from J.R. Smith, that would be a nice boost.

Also, Baron Davis was 0 for 4 with four turnovers and two assists in his 25 minutes, so the Knicks won’t be missing a player who was crucial to Monday night’s victory. Of course, unlike in hockey, winning on the road in the NBA tends to be difficult, so the Knicks are in for quite a battle. Phase one: don’t get blown out in the first half.