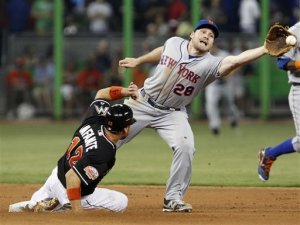 That’s the attitude I had to take with tonight’s Mets loss. Just like during the sweep in Philly, New York treated the other team’s bullpen like a piñata and came back from a multi-run deficit. However, a happy recap was not in store for tonight, as the Mets could not hang on to the lead that they stunningly created.

Trailing 3-1 entering the seventh inning, the Mets got a little closer to their South Florida rivals when Mike Nickeas ripped an RBI double to score Ronny Cedeño. The next inning, Kirk Nieuwenhuis doubled home David Wright to tie the game, and later, with the bases loaded, Mike Baxter came up with yet another big hit when he came off the bench to hit a line drive off of Miami reliever Ryan Webb. The double scored another pair of runs and the Mets had amazingly come from behind yet again to take a 5-3 lead with just six outs remaining.

Unfortunately, New York’s bullpen didn’t fare much better than Miami’s. Jose Reyes reached on an error when first baseman Ike Davis booted an in-between hop on a routine ground ball induced by Bobby Parnell. A perennial thorn in the Mets’ side, Omar Infante, followed that up with an RBI double into the right-center field gap. Parnell just managed to escape the inning with the lead intact, thanks to some help from Tim Byrdak.

In the ninth, Frank Francisco got ahead of Giancarlo Stanton 0-2, but he left a fastball a little too far over the plate, and the immensely talented Stanton smoked the stray pitch for a lead-off double. After Gaby Sanchez moved Stanton to third with a fly out, Emilio Bonifacio hit a sharp grounder through the drawn-in infield to tie the game.

Francisco did a good job to not get completely rattled. Although Bonifacio stole second base, Francisco struck out catcher John Buck to bring left fielder Greg Dobbs to the plate. On the first pitch from Francisco, Dobbs lobbed a soft liner into right field for the game-winning hit. With the speed of Bonifacio, there was no chance to stop him from crossing the plate and ending the game.

There was actually a lot of good pitching in this game before the bullpens got involved for all the drama at the end. Mark Buehrle, whose name I’m still not sure how to spell, limited the Mets to eight hits, two walks and two runs in his 6.2 innings. Buehrle exited shortly after the Mike Nickeas RBI double made the score 3-2, and the only run he allowed before that was an Ike Davis solo home run in the top of the fifth.

Johan Santana was really, really good again. After the Marlins scored three runs in the first inning — Reyes tripled, Infante singled and Austin Kearns hit a home run — Santana shut down the fish for the next five innings. In his six innings pitched, Santana allowed just six hits while walking none and striking out seven. It really is amazing how unchanged he is from his pre-surgery self. Santana only threw 82 pitches and he certainly would have gone deeper if he had not been lifted for pinch hitter Justin Turner in the seventh inning.

The Mets’ five game winning streak is now over after a ridiculously exciting night of baseball. The Amazins are right back at it tomorrow afternoon for a 1:05 PM start in Miami. Robert Allen Dickey is back on the mound to pitch against Ricky Nolasco.