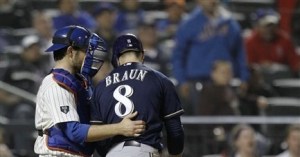 The Mets were mauled by the Milwaukee Brewers last night. Dillon Gee lasted only five and one-third innings while giving up eight hits and seven runs. Brewers first baseman Travis Ishikawa, who is only in the lineup because of regular first baseman Matt Gamel’s ACL tear, went 3 for 4 with two homers and five RBI.

The Brewers have now won four of their last eight games. In each of the four wins, they scored exactly eight runs. After the game, Ishikawa explained the need to score so many runs.

“Then we need to score eight runs every time,” first baseman Travis Ishikawa said a few hours later. “Because one run is no fun.”

You know what’s even less fun than one run? Zero runs, which is what the Mets managed against Milwaukee starter Zack Greinke as well as relievers Tim Dillard and Jon Axford. Greinke pitched the first seven innings of the game and allowed only five hits with no walks and seven strikeouts. Dillard and Axford combined to pitch two innings with zero walks, one hit and three strikeouts.

David Wright and Mike Baxter each managed to go 2 for 2 with a double, but that was the only good news for New York.

The real story happened in the seventh inning. During the top of the frame, mop up man D.J. Carrasco let up a solo homer to Rickie Weeks that made the score 8-0 Milwaukee. The next batter, superstar left fielder Ryan Braun, was hit by a high, inside fastball and Carrasco was ejected. It wasn’t made clear that the Brewers were going to retaliate, but Mets manager Terry Collins took no chances and pinch hit for Wright in the bottom of the inning.

When Wright heard he was being taken out of the game, he was visibly upset with Collins, and the two could be seen having an intense discussion in the dugout.

After the game, Collins explained that there was no intent to hit Braun in the first place, but he could understand by Milwaukee might be upset.

“If I’m the umpire, it sure looked like that,” he said. “Nickeas said, ‘We didn’t intend to hit him.’ I said, ‘Mike, I believe that. But if that’s on the other side of the field — if Kirk Nieuwenhuis hits a homer and David Wright gets drilled in a game like tonight with the next pitch — somebody better be ejected.'”

“If it’s David Wright getting hit in that instance, I totally understand what happened. I really and truly do. I don’t think we did it on purpose, but I understand the perception of the whole play.”

Although part of me thinks that Collins should have let the Brewers do with Wright what they wanted to do, another part of me respects him for wanting to protect his players. Collins let reporters know that that was his number one priority in the ordeal.

But, I’ve got news for you, in this game there are unwritten rules, and one of them is You Hit My Guy, I’m Hitting Your Guy. They’re not hitting my guy tonight. I’m not exposing him to being hit. He said, ‘If anybody gets hit, I want it to be me.’ I said, ‘I’m sorry, it isn’t going to be you.’

The only problem now is that the situation is sort of unresolved. We don’t know if the Brewers feel any ill will towards the Mets for hitting their best player and then hiding Wright on the bench. At least Braun seems okay with the whole thing.

“David is one of my favorite players in the league. I respect the fact that he wanted to stay in the game. I don’t fault them for making that decision at all. I don’t think we planned to retaliate, but I respect the fact that they made that decision. It’s smart in certain situations where you anticipate it. He’s too good of a player for them to lose.”

New York doesn’t play Milwaukee again until September 14, when the two teams kick off a three-game series at Miller Park. Next up for the Mets is a pair of home games with the Cincinnati Reds. Tonight, Johan Santana is on the mound versus Cincinnati’s Mike Leake.