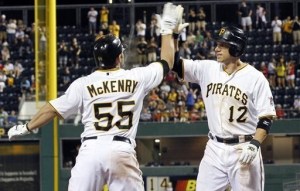 After getting out of Toronto with just one win in three games versus the Blue Jays, the Mets return to National League play this week, starting with three games against the Pirates.

Last night’s series opener got off to a good start, as the Mets bats blessed starter Johan Santana with a rare multi-run cushion. Alas, Santana let the 4-0 lead slip away by giving up a pair of runs in the fourth inning — when he gave up three straight doubles to Josh Harrison, Andrew McCutchen and Pedro Alvarez — and another pair on backup catcher Michael McKenry’s two-run home run in the seventh.

“We were trying to throw a fastball away [to McKenry] and it stayed pretty much in the middle of the plate and up and he put a good swing and it was out of the park.” Santana told reporters after the game. “I still feel that I have some work to do with my command, and especially with my fastball.”

With the game tied at 4-4 in the eighth and Jon Rauch on the mound, Kirk Nieuwenhuis and Mike Baxter nearly collided in the outfield and let a routine Neil Walker fly ball fall in for a triple.

“I didn’t hear him,” Baxter told reporters after the game. “I should have taken a look. It’s 100 percent my fault. That’s a fundamental of baseball. Kirk has the right of way on that ball. I’ve got to get out of his way on that ball. That one hurts. … I was calling for it. But it’s irrelevant, to be honest with you. As off-outfielders, your job is to know where he’s at and if he’s going to make a play on it, you get out of the way.”

Both Baxter and Nieuwenhuis had entered the game as pinch hitters in the top of the inning. Two batters later, Clint Barmes hit a fly ball to right that was just barely deep enough to get Walker home from third and give the Pirates the lead. In the ninth, Pittsburgh closer Joel Hanrahan put down the Mets in order to preserve the 5-4 win.

It was a tough loss for New York because Johan Santana hasn’t had too many leads to work with, so when the Mets get him one, you kind of expect him to lock the game up. Of course, the Mets didn’t help matters by shutting down on offense after scoring four runs off of Erik Bedard in the second inning.

“We had several opportunities to get back and add on some runs,” Collins said. “And that’s what we’ve got to do. This is the third or fourth game where we’ve scored three or four in an inning, and you look up and that’s all we’ve got. We’ve got to add on — that’ll make it a lot easier for our pitching staff.”

Ronny Cedeño got the rally started for the Mets by hitting a double to the opposite field that scored Vinny Rottino from first base. Four batters later, Justin Turner came up with the bases loaded and singled past shortstop Clint Barmes to get two more runs home. David Wright put a cherry on top of the crooked number sundae with an RBI single of his own.

Here’s the box score from last night. Ike Davis was kept out of the starting lineup with the lefty Bedard on the mound, but when he came back into the game he struck out twice against the Pittsburgh bullpen. Ouch. Andres Torres continues his slightly less epic slump, although he did walk and score a run in the second inning.

Tonight, the Mets try to get back at the Pirates with R.A. Dickey leading the charge. James McDonald with pitching for the Bucs.