I am stoked for Pokémon X and Pokémon Y

Earlier today I posted on That VideoGame Blog that two new Pokémon games are going to be released later this year on Nintendo 3DS. Needless to say, I am very excited.

In the trailer above, you can see that the graphics have been revamped since the production of the Nintendo DS Pokémon games. I know what the 3DS is capable of visually thanks to my time playing Super Mario 3D Land (which has much smoother graphics than any N64 title), but to look at a handheld Pokémon game that looks better than any of the franchise’s console iterations is pretty amazing.

Here’s a breakdown of the five new Pokémon that were shown in the trailer.

Per tradition, there are three starting options in Pokémon X and Y. One is a grass-type, one is a fire-type, and one is a water-type (Note: I haven’t seen this confirmed officially yet, but it’s a pretty safe assumption based on previous generations). Chespin is the grass-type, and it looks pretty cool even though I’m not quite sure what sort of critter it is supposed to represent. In the trailer, you can see what looks like a Solarbeam attack on a hapless Magikarp as well as a cutting strike that may be X-Scissor or maybe some new move that we haven’t seen before.

Fennekin is a fire-type and looks a lot like Vulpix except with more furriness going on in the ears. The trailer shows what looks like a basic Ember attack and also something purple that looks like it could be Hypnosis. That would be interesting, since not many fire-types learn that move. I am still likely to stay away from Fennekin because it looks like the typical high-speed, low-defense fire Pokémon that I am always uneasy about choosing. It will be interesting to see if this Pokémon gains the fighting type when it evolves, like other fire-type starters Torchic, Chimchar, and Tepig. 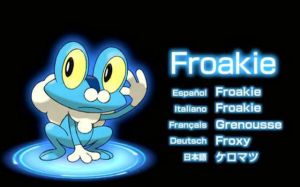 Woo! I love anphibiants for some reason. This is Froakie, a water-type that resembles a frog. We just had Seisitoad in the previous generation, but apparently someone at The Pokémon Company loves frogs as much as I do. Also, soon there will be more types of Pokémon than actual species of animals on Earth, so we’re going to have to repeat some. From the trailer, it looks like Froakie will learn Water Gun and Quick Attack in the early going.

Those are the three new Pokémon that were named in the trailer. There were also a couple of nameless monsters shown that are most certainly of the legendary variety. Here are a couple of screengrabs: 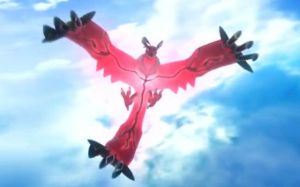 The guy on the left is a flying dragon/bird that looks like the “Y” in the Pokémon Y logo. The dude on the right is an awesome-looking stag that resembles the “X” in the Pokémon X logo. We don’t know much more about these beasts, but now you should have a decent idea of what game to shoot for if you strongly prefer one or the other.

I hope you enjoyed this early Pokémon preview. Remember, both games are set for release in October 2013. Gotta catch ’em all!

This entry was posted in Pokémon, Video Games and tagged Chespin, Fennekin, Froakie, Pokémon X and Y. Bookmark the permalink.